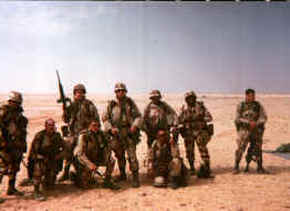 This was one of many Infantry squads that served during Operation Desert Storm (ODS).   As a part of the 3rd Armored Division's (SPEARHEAD) Ready First Combat Team, we were stationed at Ayers Kaserne (The Rock)  in Kirchgoens, Germany.  The United States Army's V Corps was in position north of Frankfurt to deter the Soviet Union / Warsaw Pact, from invading Western Europe through a terrain feature known as the Fulda Gap.  This gap was like a tactical HOV lane into the heart of Germany.

The squad had trained together for almost 2 years, with little turnover, prior to ODS.  This allowed us to become a very cohesive, proficient, combat capable unit.  We had conducted quite a bit of Infantry training together in Germany, attending the prestigious Platoon Confidence Training (PCT) at Bad Tolez; MOUT training at Doughboy City, Berlin; the annual 3rd Armored Division Ranger Camp;  the Combined Arms Maneuver Training Center in Hohenfels; and live fire training at Grafenwoher.  Soldiers of the 3rd Armored Division typically trained in the field for over 200 days of the year.  We were very capable at executing raids, recons and ambushes, and had always met the standard during Squad ARTEPS.  Although no one was RANGER qualified, we trained to RANGER standards.  All squad members were experts with their weapons, and some had been awarded the Expert Infantry Badge.  Just prior to our deployment, we received new members from another unit from Mainz, Germany, and Fort Carson, CO, bringing us up to the 9 soldiers we were authorized.

Mechanized Infantry soldiers have a military occupational specialty of 11M, meaning that they have received additional training on the M-2 Bradley Fighting Vehicle (BFV).  3rd Platoon, as well as the others in the company, was always under-strength.  Although authorized two nine man squads, we generally consolidated what we had into one element, manning priority weapons first.  Once we received the word in November of 1990 that we would be deploying from Germany to Saudi Arabia, we were plussed up with a new squad leader who came from the Berlin Brigade, which was standing down, and Infantrymen from the 8th ID, which was also standing down.  My new soldiers were 11B's, from a unit that had not yet transitioned to the BFV.  These men were highly motivated and quickly integrated into the squad and platoon.  They were then given a crash course on how load ammo and missiles, and fire the port weapons, for the BFV's.  We deployed at 100% strength.

A squad is broken down  into two fire teams - Fire Team Alpha and Fire Team Bravo.  Each team has a team leader, normally a sergeant or a corporal, and each team member has a specific duty position within the team.

Here is how the "Fighting First" was broken down...

Myself and the two team leaders were armed with a M16A2 with an M203 40 mm grenade launcher bolted underneath it.  These provided direct and indirect fire capability to the squad, allowing the leaders to mark targets with smoke rounds or tracers for the squad to mass fires on.  Each leader carried high explosive and smoke grenades.

The automatic riflemen were issued the M249 Squad Automatic Weapon (SAW).  The SAW is a light machinegun which fires the same size round as the M16 (5.56mm).  Each SAW gunner was issued 600 rounds of belted ammo in 3 plastic drums- one fitted to the gun, and each of the others strapped to their thighs to allow quick change.  These weapons provided the most firepower to the squad.

The riflemen carried an M16A2, with 120 rounds of 5.56 ammo.  The riflemen also carried additional ammo for the SAW's and the M203's, hand grenades and mines.

Unique to Bradley units was the M231 Firing Port Weapon.  This is a submachinegun version of the M16, which fires fully automatic only, and has a rate of fire of about 1200 rounds per minute.  It is designed to be screwed through the wall of a BFV and fired through a port by looking out of a periscope (vision block).  Each one having a brass catcher and a gas exhaust fan to expel toxic weapons gasses outside the vehicle.   I fabricated a harness out of my rubber pants suspenders and carried one under my armpit, which augmented my M203.

Rockets and missiles:    M136 84 mm AT4 anti tank rockets, which were an improvement over the old 77mm M72A2 Light anti-tank weapon LAW.   We also had M47 Dragon - a 90mm wire guided anti tank missile, with day and night (thermal) sights.

Each soldier was issued the M-9 Bayonet.  This was the latest model, which was pretty heavy duty, and when connected with its scabbard could be used as a wire cutter.

As you can see, a Mech Infantry squad is heavily armed.  This provided an overwhelming advantage to the squad and platoon, compared to Airborne or Light Infantry.  The organic firepower, combined with the speed and protection of the four Bradley's, provided unsurpassed lethality.

The mission of the Infantry is to close with, and destroy enemy forces by means of fire and maneuver, and to repel his counter attacks, using hand to hand combat if necessary.

Personnel protection:   Kevlar helmet and vest -  although not bullet proof, these  would protect the soldier from shrapnel.  Our load bearing equipment was worn over this

Night Vision:   Night observation device (NOD).  Either the AN/PVS-5 or the newer AN/PVS-7B Night Vision Goggles (NVG's)  and AN/PVS-4's for the weapons, as well  a thermal sight for the Dragon.  Between these and the BFV's thermal vision, we owned the night.

Communications:  I carried a PRC-77 Radio/Transmitter, to be able to communicate with the BFV's and the other squad.  Within the squad we used voice and hand and arm signals to communicate.